Project for the Fallen

Project for the Fallen

Project for the Fallen helps individuals and organizations to honor service members who are no longer with us. We donate our final project to these organizations in the hope it will raise awareness for their cause and as a reminder to our Veterans of their value.

In a special partnership with The Hudson River Maritime Museum and Riverport Wooden Boat School, we have taken Veterans who completed our program full circle. Once again, they are given the opportunity to participate in an act of selfless service. To give without the expectation of return, just as they did the day they signed that blank check for service to this country.  We are extremely proud to say every single member volunteered to participate.

Kevin Keaveny, founder of our organization, summarized why we chose the SGT Shawn M. Farrell Memorial fund as our first recipient of Project for the Fallen, “To be honest there was no discussion or question that this foundation would be the first recipient. They hold a special place in our organization’s heart, especially mine. I don’t speak of it much, but I was there when SGT Farrell came home. I never knew him in life, I was just there to pay my respects as many others did. While there I witnessed strength in a family I have never seen before and it hurt my heart knowing they suffered such a terrible loss; I’ll never forget that day. Not long after this, I ran into Holly and Hope Downie, Members of SGT Farrell’s Family and from what I see the driving force of the foundation. They were raising funds at a local store where I was taking my daughter for ice cream. They hustled me for a couple of T-shirts and we got to talking. When they found out I was a Veteran, student, and in the early stages of organizing the workshop they asked me to apply for their Scholarship. Of course, I said no, but they said to apply and again, I said no. This went on for a while, but they won. Long story short, I used that scholarship to fund our first kayak build.” 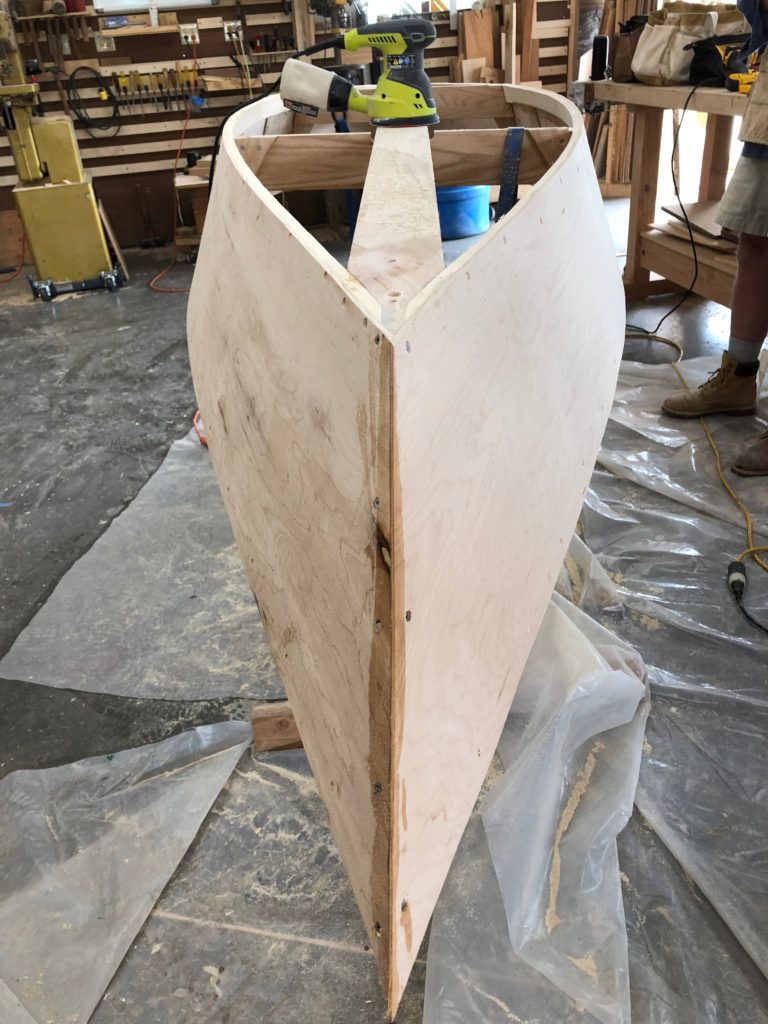 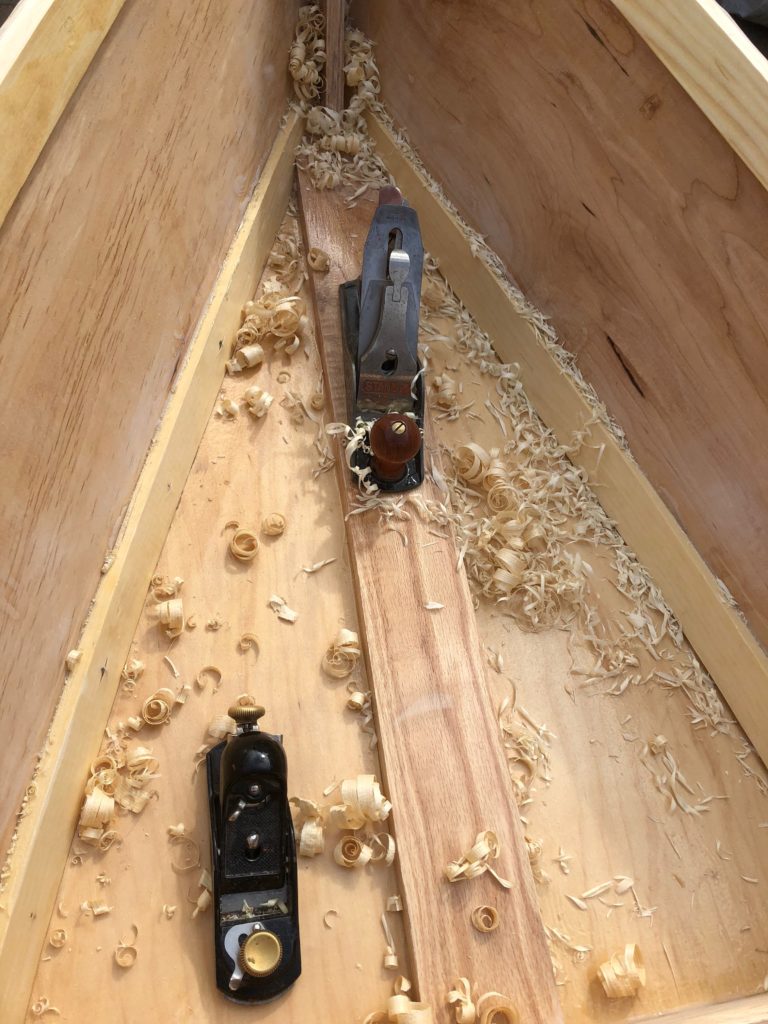 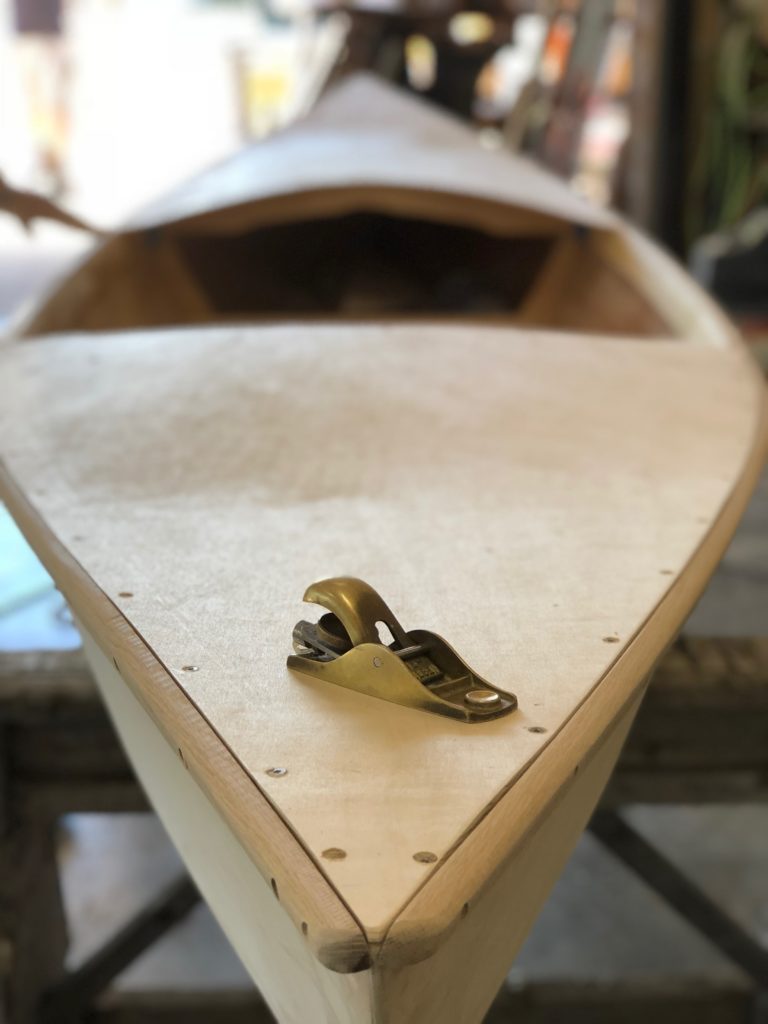 When we approached the Maritime museum, they welcomed us with open arms. A little-known secret, they have many Veterans that work and volunteer in their organization and they were just as excited as we were to partner. The expertise and dedication to the project was amazing. We learned many things as we went along. And a lot of love went into that Kayak. Construction was completed at the Riverport Wooden Boat School and the Kayak was taken home to do the finish work. When all was said and done, over 25 individuals worked on this project and hundreds of hours contributed.

We would like to extend a special Thank You to Brian Rooney and John VanBuren, volunteers at the Maritime Museum. Brian was our main point of contact and is a very creative individual that helped give the Kayak some beautiful lines. John was so taken by the project he built a custom paddle for it, and it’s gorgeous! John is also one of the many that put on a uniform for this country. We thank both of you gentlemen!

The Veterans Wooden Boat Workshop is dedicated to the well-being of Veterans and Community through purpose, dignity, and respect. Our mission is to bring much-needed programs into the area. This project is coordinated and led by Veteran volunteers and community leaders who donate their time and experience to help struggling Veterans reintegrate.